Last year I was having an email conversation with Brian Bruce, then Assistant Director for Media Relations at the University of Tennessee.  He said that there was a discrepancy in the series history between UT and the University of Kentucky.

I took a look, and yes, things aren't quite right.


That's a difference of 15 total games.

Looking through UT's Record Book I see where some of the confusion might come in to play.  Maybe one of the schools had confused the school name.  It could happen.

UT has a total of 25 games being played against the Kentucky State Thorobreds.

Wondering if any of the dates lined up from Kentucky State to UK, I looked at UK's 1909 season.

Two of the dates are on, but UT lists three games against Kentucky State.  How about the scores?  Only one of them matches.

So, I turned to the school's yearbooks.  The following came from the 1910 UK yearbook, but shows the scores for the 1909 season.

KSU played Tennessee 3 times.
Those sort of match what UT reports for their games against KSU.

UT doesn't have scores listed in their yearbook, but  it does show the dates.  The game dates are around the dates reported in the media guides, but they don't exactly line up.

For more help I turned to some contemporary newspapers via GenealogyBank.com.


Based on the previous article, it would appear that there was one game played on Friday and that Tennessee won it 11-4.

Then a doubleheader was played on Saturday, May 22.  Tennessee won both of those, but was were the scores?  6-1 in the first game and then 9-1 in the second game.

Now my head hurts.  Many sources and many different dates and scores.   The common thread is that UT won all the games and that they were played in Knoxville.

The first game of the double header was won 6-1 and those games were played on Saturday, May 22, 1909.  The second game was won by UT, but what was the score?  More research is needed, probably looking at Knoxville newspapers as well as any other UT publications.

UPDATE: I have researched the local papers and present the results here.

Some of my readers might be saying at this point, "Are you nuts?  You haven't really  addressed the fact that there are two different school names being tossed about, KSU and UK."  Here goes...

From the UK webpage about the history of the school


The University of Kentucky, during the 1909 season, was known as Kentucky State University.

It is my opinion that the the UT Record Book should transfer the KSU games from the 1909 season to UK.
Posted by Mark Aubrey at 12:50 PM No comments:

The Athletics and the Lone Stars

This is the first mention of two colored base ball clubs in Knoxville.


Also from the same page of the newspaper, this ad from Ramage & Co. 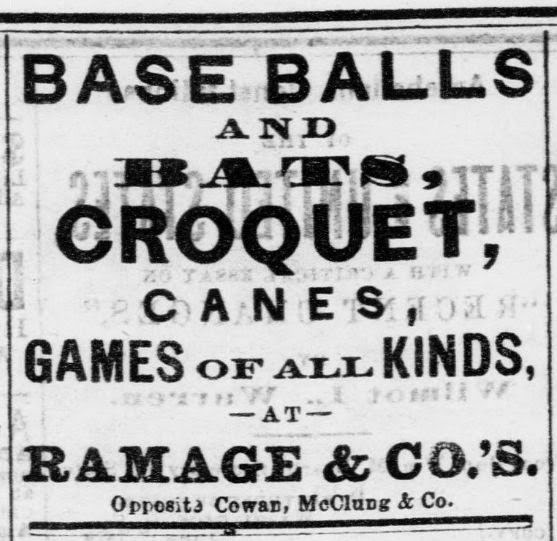 The next day's edition gave us the results.


images from The Library of Congress's site: Chronicling America
Posted by Mark Aubrey at 3:43 PM No comments:

Email ThisBlogThis!Share to TwitterShare to FacebookShare to Pinterest
Labels: 1879

Alfred M. Rossi. Pitcher for Chattanooga, Charlotte, Knoxville, and Richmond over six seasons, finishing with a 73-62 record and a 3.85 ERA.

More important than his baseball journey was his service to his country.  He served in World War II with the U.S. Coast Guard.  Thank you, Mr. Rossi, and all those that are veterans, past and present.

image from GenealogyBank.com
Posted by Mark Aubrey at 11:29 AM No comments: