1868 Championship of the State

The Knoxville Holstons were the state champions of 1867. They were challenged to play a match for the championship of the State by the Phoenix BBC of Nashville.


There is a wonderful four column write up in the Republican Banner of Nashville.  Each play described in detail for every inning.  Too large to reproduce here and probably would violate some spirit of copyright law issues.  I present just the box score.


The Nashville team would come to Knoxville to face the Holstons again later that same month.

Posted by Mark Aubrey at 3:43 PM No comments:

Email ThisBlogThis!Share to TwitterShare to FacebookShare to Pinterest
Labels: 1868

In the spring of 1888, early May to be specific, athletes from various universities in Tennessee, came to Nashville to compete in various athletic and scholastic competitions.  Track and field events were scheduled, as well as am oratory contest.

The highlight would be the base ball games between the Vanderbilt and University of Tennessee clubs.

The first day started with field sports beginning at 2:15pm with the ball game to begin at 4 o'clock.

Vanderbilt was to be the victor in the first game, winning 9-6.

A second game was sceduled for the next day.  Vanderbilt, again, was victorious.  This time the score was 9-1. 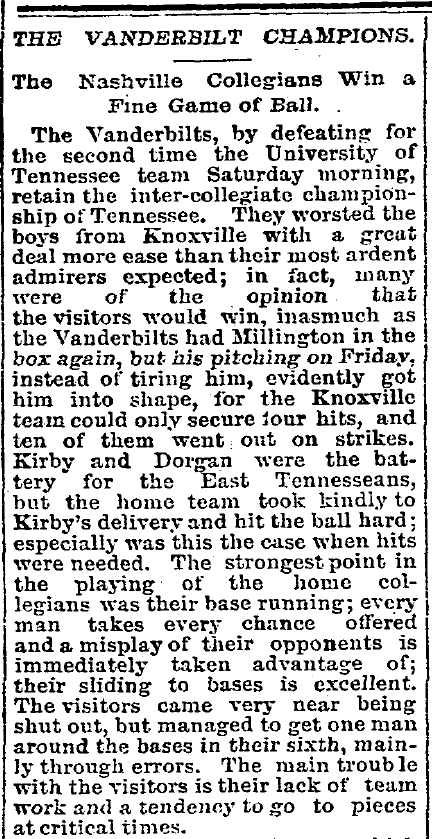 These are the first recorded meetings of the two school's baseball teams.   The University of Tennessee says that their first official baseball team was formed in 1897.  I might argue, but not too strongly at this time.