There are several "This Day in Baseball History" and "On This Day" type of posts / blogs / twitter feeds. One of those that I follow is my fellow baseball historian, Skip Nipper (twitter feed: mrsulphurdell).   Skip shares his extensive knowledge of Nashville area baseball, frequently with an "on this date" post.

I'll do that today.  Back in 1940, the Southern Association had just started their games for the season.  The Nashville Vols were playing host to the Smokies. 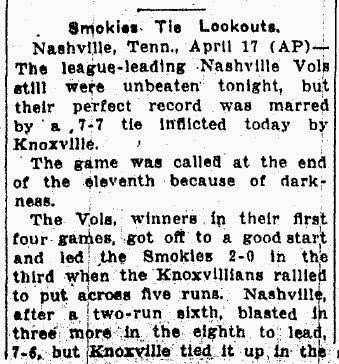 The Daily Herald, of Biloxi, indicated that the tie game would be completed at a later date.


And this is how the teams stacked up that opening week.

With the opening of the season comes pomp and fanfare. Earlier in the month the Knoxville News-Sentinel reported that Tennessee's governor, Prentice Cooper, had been asked by both Memphis and Nashville to throw out the first ball.  Another dignitary that was asked to take part in the opening day ceremonies was Sgt. Alvin C. York.


I have not discovered if either of these men participated in the festivities in Nashville.  Time to talk with Skip.  But on another day.  Today he's celebrating the opening of Nashville's new ballpark.

images from GenealogyBank.com
Posted by Mark Aubrey at 11:54 AM