Earl Baxter Williams - side by side

Picture 5 is 'new'.  It is from the 1924 Chilhowean, but a different player than previously posted.

Pictures 6 and 7 are 'new' and from a private collection.

Picture 8 is 'new' and from Earl's Find-A-Grave memorial page, with the submitter saying that he got it from OOTP.

Any informed thoughts would be welcome in the comment section. 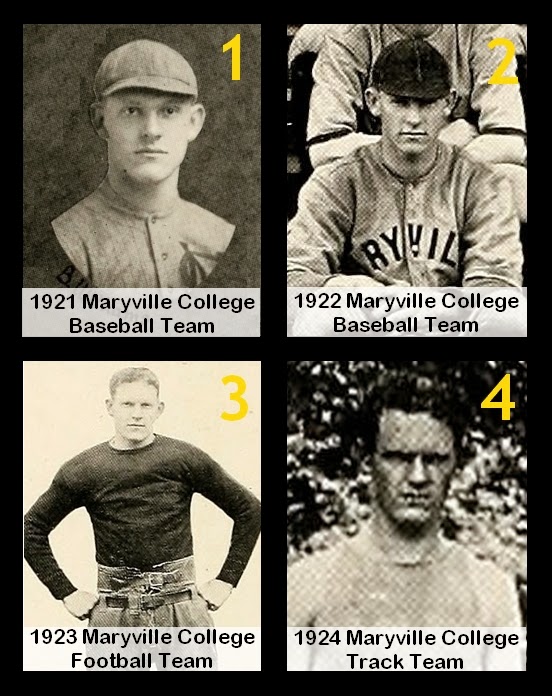 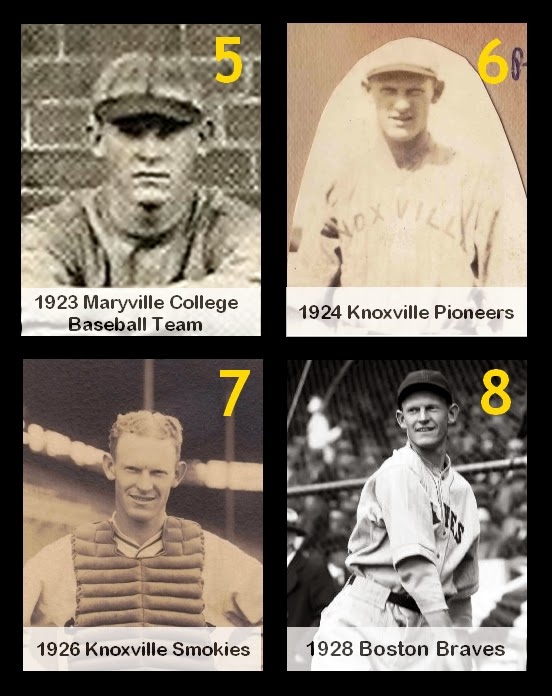 Posted by Mark Aubrey at 3:02 PM No comments:

Although the following articles don't reference Knoxville specifically I thought that they should be included in this post.

Could "Wing" be "One-Wing" Maddox, formerly of Knoxville?

Earl Baxter Williams was born January 27, 1903, in Cumberland Gap, Tennessee.  He attended Maryville College and went on to a seven season minor league career.  He made it to the majors, playing three games with the Boston Braves in 1928.  He and his brother, Roger, were associated with WNOX, an early radio station in Knoxville.

Digging through the Chilhowean yearbooks from Maryville College I've pulled out some photos of Baxter, as he was known.


UPDATE: April 23, 2014 - I shared this post with Mark Fimoff, co-chairman of the SABR Pictorial Committee.  I'm adding his comments in red in the captions of the photos.


Baxter was a multi sport athlete.  He hurt his ankle and sat out a few games of football.

UPDATE continued: Taking a look with fresh eyes, I'd agree that the final photos (1924 MC Baseball Team) are not of Baxter Williams.  Perhaps the photo was taken after Baxter went to the Knoxville Pioneers.  It has a resemblance of his brother, Roger Williams from the first photo.  There are more people in the 1923 Team photo than have names listed.  Perhaps Baxter is dead center in front of the brick wall.  I still see Baxter Williams in the 1922 Team photo.  I'll try to isolate and group the closeups for easier comparison. - Mark

The student newspaper reports that Baxter didn't complete the last two games of the 1924 season because he had signed with the (Knoxville) Pioneers.

all images from archive.org
Posted by Mark Aubrey at 2:08 PM No comments:

Group in Knoxville Takes Over Franchise in Mt. States


And from the same paper...

Posted by Mark Aubrey at 7:04 PM No comments:

Email ThisBlogThis!Share to TwitterShare to FacebookShare to Pinterest
Labels: 1953


1953 would be a tough season for the Smokies.  The Giants left them.  They took in the Tugerson brothers.  Smithson Stadium would be torn down and the team relocated to Chapman Highway Park.  By the end of the season they would be crowned champions of the Class D Mountain States League.
Posted by Mark Aubrey at 10:26 AM No comments:

In the spring of 1947 the major league teams were breaking camp at spring training and headed back to their cities in the north.  Along the way they would play exhibition games, probably to get a few more swings in and to give the locals a chance to see some real big leaguers.  The Cincinnati Reds and the Boston Red Sox came to Knoxville and played a game on Tuesday, April 8, 1947.

The story after the game shows that Ted and Company didn't come through as expected.


Former Knoxville Smoky Eddie Lukon was playing for the Reds.  This was the last year for "Mongoose" in the majors.  He moved out to California to play for the Los Angeles Angels of the Pacific Coast League in 1948.  Eddie played with the Smokies in the Southern Association, batting .315 and hitting 35 Home Runs over two seasons (1941-42).  He roamed the outfield for the Reds for a few seasons (1941, 45-47).

Ted, despite having breakfast at the Andrew Johnson Hotel in Knoxville, wasn't able to put the ball out of the park.

For those of you that like to see a box score, here you go.

The Sporting News was a weekly so they've recapped some of the games on the trip north.


Because this was just such a great shot I had to isolate it.  Drink up, kids.  Make sure it is orange juice.

I'd like to thank fellow SABR member Brad Ridenour for finding the Knoxville News Sentinel articles and sharing them with me.  The Boston Herald and Greensboro Record articles came from GenealogyBank.com.  The Sporting News article came from PaperOfRecord.com through SABR.
Posted by Mark Aubrey at 1:57 PM No comments:

Email ThisBlogThis!Share to TwitterShare to FacebookShare to Pinterest
Labels: 1947

In The Good Old Days

Adam Alfrey gave a talk today at the East Tennessee Historical Society.  Adam is the Operations Manager and Curator, East Tennessee History Center, Knox County Public Library.   He spoke on Base Ball in Knoxville in 1867.  He had some wonderful supporting articles from local papers.  I need to ask him for his notes so I can clarify some things in my mind.  I learned a lot today.

Here's an article from 1895 that looks back on the early days of ball.

image from GenealogyBank.com
Posted by Mark Aubrey at 4:49 PM No comments:

Email ThisBlogThis!Share to TwitterShare to FacebookShare to Pinterest
Labels: 1895