While looking through the digitized archives of the Knoxville News-Sentinel for Frank Moffett, I came across the obituary of Dr. Ray V. DuPue, physician.

Frank Moffett was involved in quite a few baseball enterprises, as a player, manager, promoter, league organizer, and scout, among other things.  When could Ray have played for Frank?  According to his obituary, Ray was 88 when he died in 1974.  That would put his birth around 1886.  I found his World War I draft registration card on FamilySearch.org.

The birth year is confirmed.  Since he graduated from LMU's medical school in 1910, I'm going to assume that he had a window from 1906 to 1908 to play for Frank.

There is just one DePue listed at Baseball-Reference.com.  He played in 1907 for the Darlington/Florence Fiddlers of the South Carolina League.  Maybe he's our man?

Oh, look.  Frank Moffett is one of the managers.  I'm feeling better about this.

Here's a newspaper article from that season:

And here's the end of season average for DuPue.


From the info I've gathered we can add a few more details to the BBref listing for DuPue.
He had 11 Runs, 1 Sac. Hit, and 2 Stolen Bases.

But how is it that Moffett and DuPue came to Darlington?  It looks like Frank Moffett had a good team that played in Chattanooga but Darlington purchased them.

I don't yet have any info on Moffett's Chattanooga team.

As mentioned in his obituary, Dr. Ray V. DePue was buried at Knoxville's Greenwood Cemetery.  Here's a link to his FindAGrave memorial.

I don't have 100% proof that the DePue with no first name is Ray V. DePue, but I'd bet my paycheck on it.
Posted by Mark Aubrey at 4:56 PM No comments:

The half-named players of the 1929 Knoxville Smokies

Baseball-Reference.com does good work. But some of their data is lacking. Not surprising when one considers the thousands of players that have suited up professionally.  I'm going try to correct some of the missing info.

Here's bbref.com's page about the 1929 Knoxville Smokies.  I've snipped a portion of the roster and will try to determine if I can find more info about these half-named players. 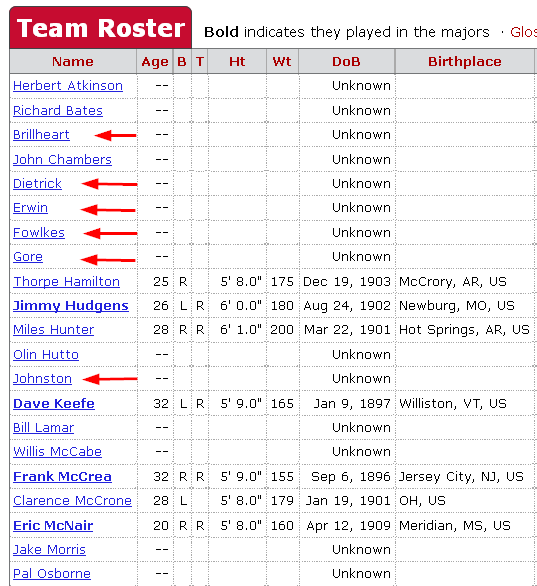 Players are listed with limited info, most noticeably no first name.  Digging into the newspapers reveals a bit of info about some of the players.

Brillheart (Sabr ID: 9994f9b9).  That would be Walter Brillheart.  Now we've got a first name.  And we know that he was a right-handed pitcher. 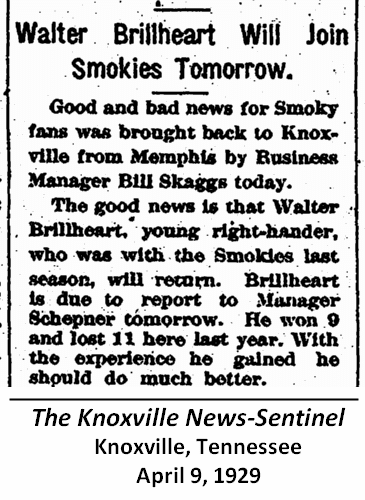 Dietrick (Sabr ID: e9e69bc3).  That would be Bill Dietrick.  Or as spelling sometimes gets mangled, Bill Deitrick.  I think that these two players need to be combined.


Fowlkes. That would be Hi Fowlkes.


The Fowlkes family has a website featuring Hy Fowlkes, complete with a different photo.

Could it be that this Gore and Joe Gore (Sabr ID: 2b5a9b36) are the same player?  The scant info in the newspaper article hints towards it.  And we know that this Gore was a right-handed hitter.

There's a lot more biographical info to be researched.  Dates and places of both birth and death.  School and burial info.  But this is a start.

Newspaper images from the Papers to Pixels campaign of the Knox County Public Library.
Posted by Mark Aubrey at 1:09 PM No comments:

In 1929 Professor James Beck became the president of the East Tennessee Colored League, an eight team amateur loop in the greater Knoxville area.  The Park City Cubs, managed by Cicero Frazier, won the championship at the end of September.  In July of that year there were at least 11 amateur leagues in and around the city.

From census records and WWI Draft Registration Card,  we see that Cicero Frazier was born about 1895, was a tile layer for a furniture company and lived on Martin Mill Road with his in-laws (1920 Census).  Ten years later he was a laborer in the construction industry, living on Bethel Street (1930 Census).  He died on January 19, 1944, at his home on Bethel Avenue in Knoxville (death certificate which states his year of birth as 1897). 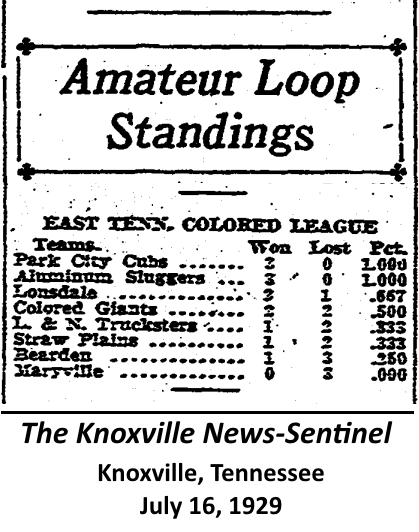 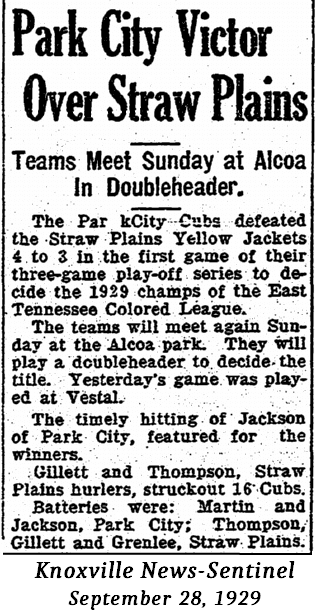 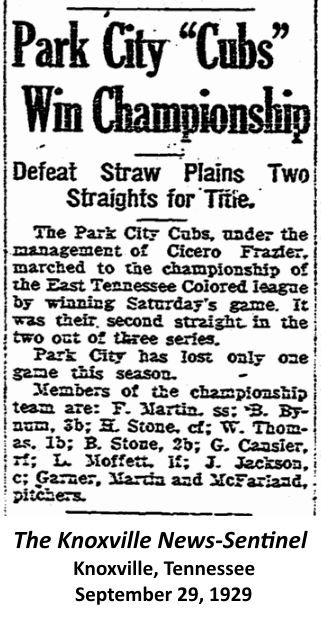 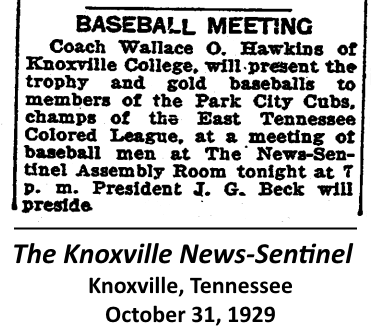 From the Papers to Pixels Project of the Knox County Public Library.
Posted by Mark Aubrey at 9:06 PM No comments:

Email ThisBlogThis!Share to TwitterShare to FacebookShare to Pinterest
Labels: 1929 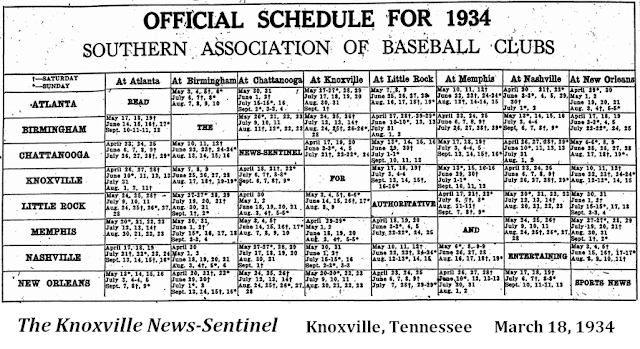 From the Papers to Pixels Project of the Knox County Public Library.
Posted by Mark Aubrey at 10:00 AM No comments:

Email ThisBlogThis!Share to TwitterShare to FacebookShare to Pinterest
Labels: 1934 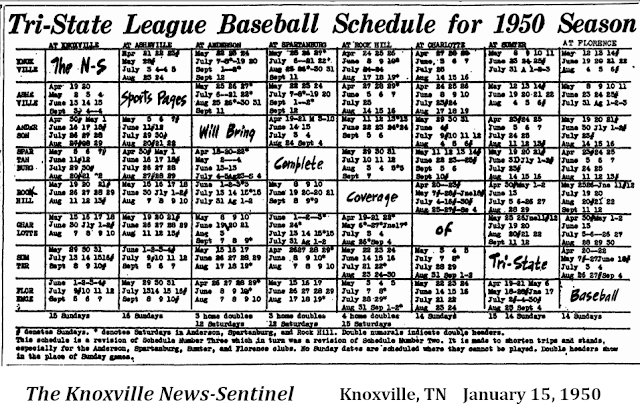 From the Papers to Pixels Project of the Knox County Public Library.
Posted by Mark Aubrey at 1:58 PM No comments:

Email ThisBlogThis!Share to TwitterShare to FacebookShare to Pinterest
Labels: 1950

Through the efforts of the Knox County Public Library the archives of the Knoxville News-Sentinel are coming on line. I've found a few of the schedules of the Appalachian League. 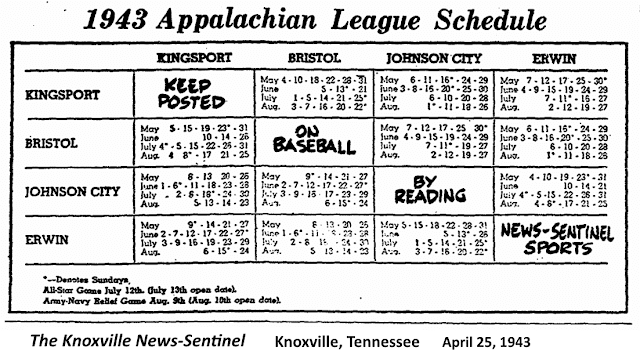 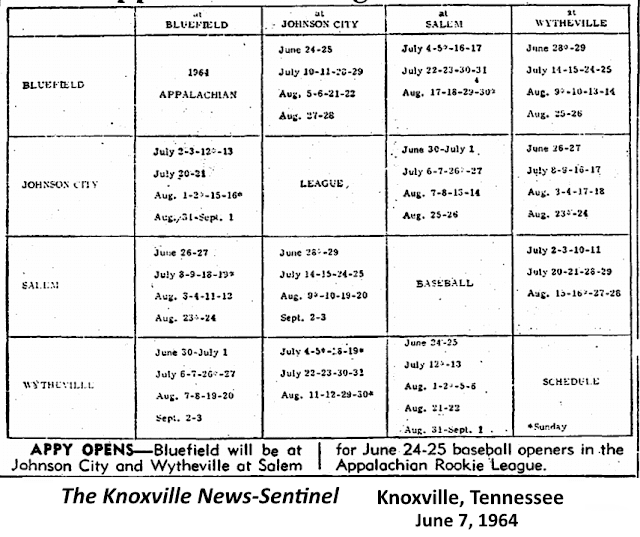 Posted by Mark Aubrey at 9:23 PM No comments: