According to the University of Tennessee's Baseball Record Book the coach of the 1911 team was Z. G. Clevenger.
There's even a nice narrative about him.

So, if not Clevenger, who was coaching the Volunteers?  It appears that it was Andrew Alexis Stone.


So, the 1911 season results in the Record Book should look something like this: 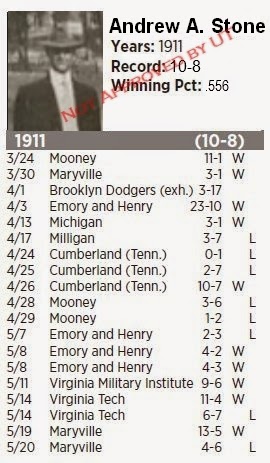 Please note, this new info has not been verified or approved by the University of Tennessee, hence the overlay.

But, since I'm playing "let's rewrite the record book",  here's what Clevenger's new mini coaching bio would look like:

In addition to updating his stats I've used a more contemporary picture that I found at Wikipedia.org. They picked it up from the National Football Foundation website.

This post focuses on the coach of the 1911 team, not the games played.  But setting up for a future post, UT's first game was against Mooney.  That would be Mooney School.  Or Mooney's School.  We now call it Battle Ground Academy, based in Franklin, Tennessee.  It was a college prep school.  A high school.  Yes, it was an opponent, but should high school games be included in the official records?


...they [UT] should footnote the wins as being against a High School.

I supported it then and support it now.

Email ThisBlogThis!Share to TwitterShare to FacebookShare to Pinterest
Labels: 1911, University of Tennessee


Henry Kawaihoa Oana, also known as Prince Oana, played ball in Knoxville for a partial season (1937) before going to Little Rock, also of the Southern Association.  He eventually made it to the Majors in 1943 and 1945, pitching for the Detroit Tigers.

image from NYS Historic Newspapers
Posted by Mark Aubrey at 11:41 AM No comments:

Moving on to the University of Tennessee's 1910 series against the University of Kentucky I run into issues right at the start. According to the results of the season, UT played Kentucky State six times over two weekends.  That isn't typical scheduling.

The UT yearbook starts to sort out some of the confusion.  We learned from the last post that KSU became UK.

Central of Kentucky became Eastern Kentucky, but I don't see any mention of the 1910 season games.

Let's look at the 1910 UK schedule and results to verify schools and dates.


The 1911 UK yearbook supports the scores and dates in their media guide.


Well, the dates and score match up between UT and UK baseball media guides.  What do the newspapers of the day say?


Turning to Central of Kentucky and the games that next week.

Here the scores are:
And in UT's Record Book:

The UT Record Book has games 1 and 2 of the second day reversed, but the scores match up.  Eastern Kentucky University (formerly Central University of Kentucky) does not yet have this season listed in their media guide.