It was just past the middle of July, 1932. A heat wave was enveloping Knoxville. On Sunday the 18th, the high was 92 and it didn't hit the low of 80 until midnight. Monday would reach 93.

The Smokies were in Chattanooga where they had split a double header with the Lookouts of the Southern Association. As a matter of fact, all the league teams that played that day split their doubleheaders. The Smokies were trying to climb out of the bottom of the standings. After Sunday's games they were in seventh place, 41-56. Only the Crackers of Atlanta had a more dismal record at that point in the season.


Howard Freigau hadn't played in a major league game since September 29, 1928 for the Boston Braves.  That day he pinch hit against the St. Louis Cardinals\, the major league team that he started with in 1922.  He didn't collect a hit.

In the early morning hours of Monday, July 18th R. H. Griffith. a resident at the Chattanooga Golf and Country Club invited Freigau to escape the heat of the day in the club's pool.  Freigau dove into the pool from a 20 foot tower and hit his head on the concrete bottom.  He was stunned and drowned.  He was pronounced dead by the Lookouts' team physician, Dr. H. Quigg Fletcher.

The story was reported on page one of The Knoxville News-Sentinel that very day. 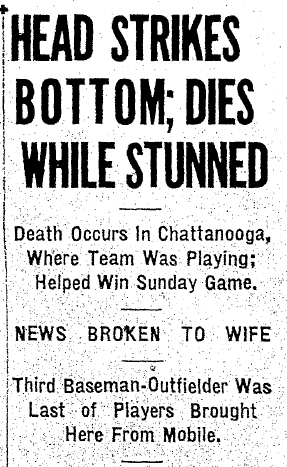 There was an article on the sports page about Freigau hoping to get back to the big league. 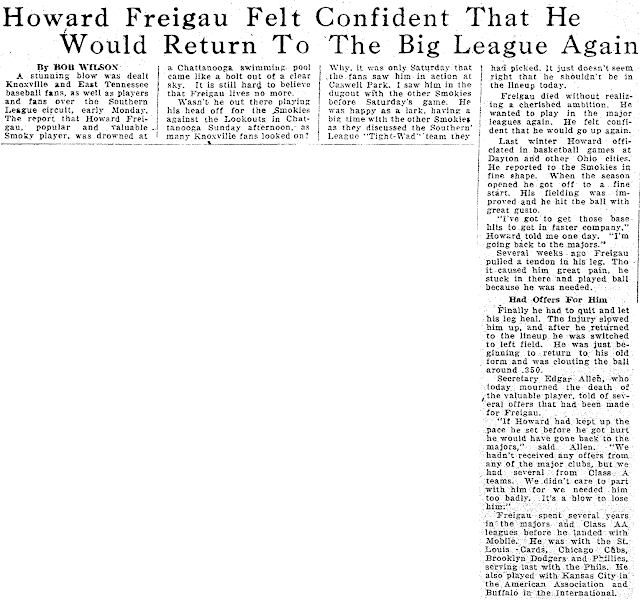 His wife, the attractive Mrs. Mildred Freigau, left her home in Knoxville to tend to her husband's body in Chattanooga.

The Arkansas Gazette reported that at the time of his death he was batting better than .340.

The Smokies beat the Lookouts in the game that Monday by a score of 5-2.  The Knoxville club finished at the bottom of the Southern Association with a 60-93 record.

Howard Earl Freigau is buried at the Woodland Cemetery in Dayton, Ohio.


NOTE: It was the sudden and unexpected death of José Fernandez of the Miami Marlins that spurred this post.

Posted by Mark Aubrey at 7:46 PM No comments:


I'd never heard of Zeke Frumin, so off I went to my usual research haunts.

I was able to find a Seamore Frumine and his family living in Chattanooga at the time of the 1930 Census.

I found Seymore Frumin in the Chattanooga High School annual for 1937.

I was able to find Zelik and his family living in Chattanooga at the time of the 1940 Census.

His player page at Baseball-Reference doesn't list a place of birth.  The census images above indicate Poland.

After his baseball career was over Zeke was in Knoxville, playing basketball for the Jewish Community Center.

Zeke passed away in 2015.  Below is his obituary as it appeared in The Knoxville News-Sentinel.


FRUMIN, ZELIG (ZEKE) - 94, formerly of Knoxville, passed away Saturday, January 17, 2015, at his home in Sarasota, FL. He was a long time member of Heska Amuna Synagogue. Zeke was a loving husband to Rosie Cooper Frumin (deceased), and a devoted father and Papa to his family. He was a lifelong sports fan having played second base for the Chicago Cubs minor league from 1943-1947. In later years, he was an avid tennis player, a devoted UT fan, and a dedicated cheerleader for the Atlanta Braves. Zeke is preceded in death by his parents Dora and Sol Frumin; sister, Ann Busch, and brother, Walter Frumin. He is survived by his brother, Isidore Frumin of Chattanooga, his daughters and sons-in-law, Joani and Gary Leeds and Ardell Terry and Jim Atsaides; grandchildren and spouses, Jennifer Zlotogura (Pete) Littleton, Michel Zlotogura (Ken) Morrow, Jonathan (Carmen) Terry, and Ben (Lynn) Terry; great-grandchildren Zoe Littleton, Lauren Knight, and Emma and Dustin Terry. Family and friends will meet Wednesday at 9:45 AM at the New Jewish Cemetery for a 10:00 AM graveside service with Rabbi Alon Ferency officiating. Pallbearers: Jim Atsaides, Arnold Cohen, Gary Leeds, Pete Littleton, Ken Morrow, Ben Terry, and Jonathan Terry. The family request that in lieu of flowers, memorial donations be made to the Pat Summitt Foundation at patsummitt.org, Heska Amuna Synagogue at heskaamjna.org, or Tidewell Hospice at tidewell.org. Online condolences may be sent to www.rosemortuary.com. Arrangements by Rose Mortuary Mann Heritage Chapel. Knoxville News Sentinel (TN) - Tuesday, January 20, 2015

Posted by Mark Aubrey at 1:06 PM No comments: