The University of Tennessee Volunteers have played against the Hoosiers of Indiana University just three times before this weekend's series.  1917, 1921, and 2011.  UT won the first twp of those games.

Here's what my research produced.

IU plans a southern tour, scheduling UT on Wednesday, March 28, 1917.  Here's what was happening that month: The Jones Act was created, Puerto Rico territory created, US citizenship granted. In the Stanley Cup: Seattle Metropolitans (PCHA) beat Montreal Canadiens (NHL), 3 games to 1 - Seattle is 1st US team to win Stanley Cup.  The US is the first nation to recognize the new government of Russia. 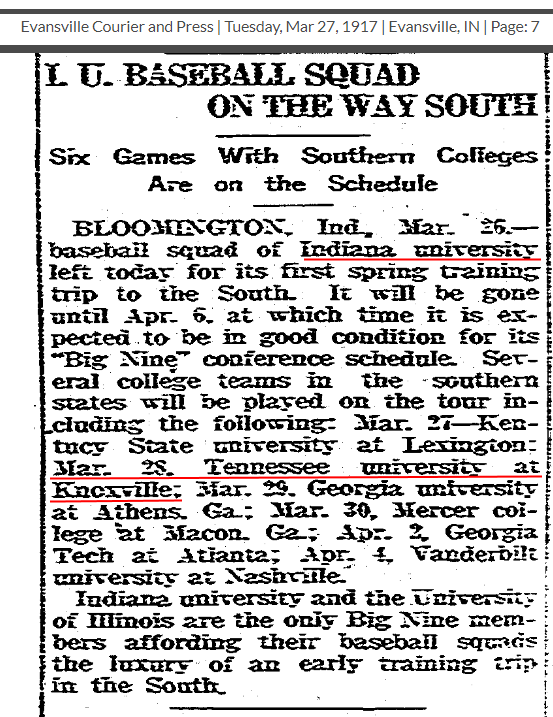 As reported in newspapers around the nation, UT downs IU, 5-2.

The Indianapolis News explains why. 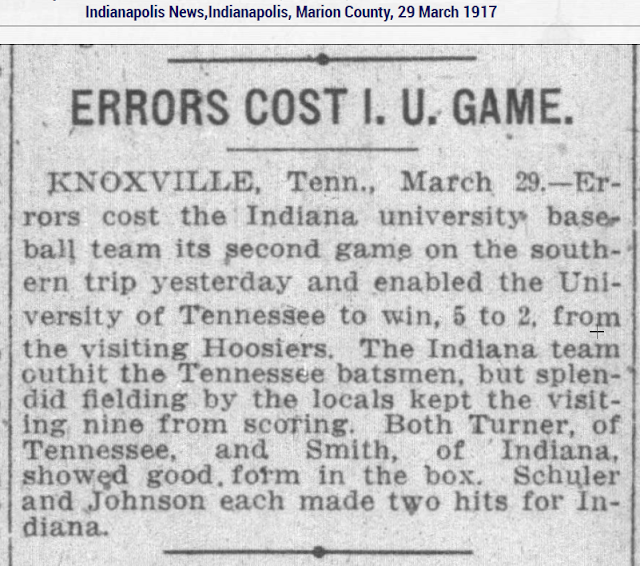 90 years later, on March 5, 2011, the Hoosiers found revenge, besting the Vols 6-3.  Some events of that month were: The Space Shuttle Discovery makes its final landing after 39 flights. A reactor at the Fukushima Daiichi nuclear power plant melts and explodes and releases radioactivity into the atmosphere a day after Japan's earthquake. Charlie Sheen is fired from the CBS sitcom "Two and a Half Men". 52nd SEC Men's Basketball Tournament: Kentucky beats Florida, 70-54.

Jumping ahead to 2019, the Vols have already taken the first game of the series, 5-1 and as I type this, are up 2-0, at the top of the third inning of the second game.